Easter is such a great holiday and such a wonderful time of year! We often go to a sunrise church service and by the time we get home, we are all ready for a delicious breakfast. This breakfast casserole is so simple and delicious and we all love it! At Christmas time, this recipe was our most popular post ever and I can understand why.

You mix the casserole up and leave it in the refrigerator overnight and then pop it in the oven the next morning. We serve ours with fruit and either muffins or cinnamon rolls. Listed below are a few of our favorite breakfast sweets. Enjoy your Easter!

Mix all the ingredients together except the 1/2 cup of cheese. Pour into a greased 9×13″ pan. Top with the shredded cheese. Cover and put into refrigerator overnight. Let sit on counter for 5 to 10 minutes and then bake uncovered at 325* for about 45 minutes or until the eggs are cooked.

In an effort to mix up our eating a bit, we’ve been making a lot more eggs for breakfast – for dinner too, really. The other day we had a ton of eggs and I didn’t have a dinner plan, so I whipped this delicious egg scramble up. It was so colorful with all the yummy veggies and it was really quite hearty too. It was so good, I’ve made it several more times, using whatever veggies we have on hand, so you can get creative!

In a large skillet, add about 1 T of oil, whatever you like to use. We’ve recently started using coconut oil. I was worried that the flavor might be too strong for my taste, but it’s not. I don’t even notice it once it is cooked.
Add the onions, red bell peppers and butternut squash. Sprinkle a bit of salt and pepper over the top and cook until the butternut squash is slightly softened. Add the zucchini and cook a bit more and then add the chopped spinach and cook for just a couple minutes, it will wilt down quite a bit. While the veggies are finishing up, start cracking the eggs into a bowl and mix with a fork. Pour over the top of the veggies and stir. Cook until the eggs are ready. Sprinkle the feta cheese over the top of the cooked eggs and give it one more stir. That’s it. This makes 4 servings. We served ours with toast and avocado and a bit of green salsa. Enjoy!

I love making egg dishes for dinner. Our chickens hadn’t been laying for a bit, but now they are in full production again so we are back to having breakfast for dinner! I found this recipe on Betty Crocker and knew I had to try it. We love chorizot- it’s a spicy Mexican sausage that adds tons of flavor to eggs. This recipe was super fast and my family loved it.

In 10-inch cast-iron skillet, cook chorizo, onion and garlic over medium-high heat, stirring occasionally, until chorizo is cooked and onion is tender. Sprinkle about 1/2 the can of black beans into the skillet and 1 cup of cheese and stir together with the chorizo. In a medium bowl, stir Bisquick mix, milk and eggs until blended. Pour over mixture in skillet. Top with remaining 1 cup cheese and the rest of the black beans.

Bake for 25 to 30 minutes or until knife inserted in center comes out clean.

Cool 5 minutes. Top with chopped cilantro if desired. We served ours with salad, fruit and warmed tortillas.

Make-Ahead Directions: Make as directed up until ready to bake. Cover and refrigerate up to 12 hours. Uncover, and bake as directed. 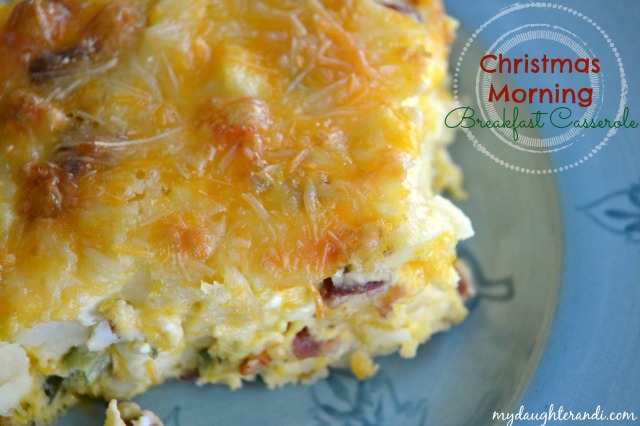 This casserole is delicious and so easy. It is also our most popular recipe EVER! While we’ve always loved it, in the past I would only make it for Christmas morning. However, I have started making a bit more often since it is so good and easy. Jordan made it for her early morning Bible study and we even made it this year for Thanksgiving morning. For Thanksgiving we added cooked Italian chorizo sausage instead of bacon- it was a bit spicy and delicious. Below is the original post – I hope you like it as much as we do.

If you end up making this recipe, we’d love to know about it. Take a picture and post it on Instagram and tag us @mydaughterandi and include the hashtag #mydaughterandiblog so we can see your wonderful creations!

In case you are planning your Christmas menu, I thought now would be a great time to share this recipe with you.  I started making this recipe for our family probably 15 years ago.  With three small children wanting to open gifts and play with toys and two hungry adults wanting to enjoy a nice breakfast, this was the perfect solution.  I’m really not sure where I got the recipe, but we all love it.

You make this dish the day/night before and put it in the refrigerator.  It is cooked the next day, so it is simple if you’re expecting guests or you are busy opening presents! We serve ours with cinnamon rolls and fruit.  This year I am going to make these shortcut cinnamon rolls.

This past weekend we were going on a family hike before church on Sunday, so on Saturday I decided to make this dish.  It was weird because I normally ONLY make this dish on Christmas.  It was delicious and perfect to have ready when we got home from our hike and it made me wonder why I don’t make this recipe more often.

Mix all the ingredients together except the 1/2 cup of cheese. Pour into a greased 9×13″ pan. Top with the shredded cheese. Cover and put into refrigerator overnight. Let sit on counter for 5 to 10 minutes and then bake uncovered at 325* for about 45 minutes or until the eggs are cooked.

Clearly, we love homemade cinnamon rolls around here- we’re always on the hunt for the perfect recipe!

In a medium bowl, combine cream cheese and butter until creamy. Add powdered sugar, vanilla extract, and cinnamon and mix until creamy. Frost the still warm cinnamon rolls or refrigerate until you’re ready to use. If you make ahead and refrigerate the frosting, allow it to come to room temperature for easier spreading.

Directions: I made my dough in my stand mixer. It made it very simple. No kneading necessary. In a large bowl or in the bowl of a 5-quart stand mixer, combine all the ingredients in the order given except the Cinnamon Filling and the Butter Frosting. Using the paddle attachment, mix everything together until a soft dough starts to form.

Change to your dough hook and knead in the mixer for 8 to 10 minutes. Cover the bowl with plastic wrap and let rise until double in size, about 1 hour. I put the bowl into my oven that I have slightly heated and then turned off.

Butter a jelly roll pan; set aside or a large cookie sheet with edges. I prefer the larger size to allow the cinnamon rolls to expand.

After dough has risen, using your rolling pin, roll and stretch the dough into approximately a 15 x 24-inch rectangle.

Brush the 1/2 cup softened butter (listed below in the Cinnamon Filling) over the top of the dough with a rubber spatula or a pastry brush. Sprinkle Cinnamon Filling over the butter on the prepared dough. Starting with long edge, roll up dough; pinch seams to seal. NOTE: Rolling the log too tightly will result in cinnamon rolls whose centers pop up above the rest of them as they bake.

Cover and let rise in a warm place for approximately 45 to 60 minutes or until doubled in size (after rising, rolls should be touching each other and the sides of the pan).

Preheat oven to 350 degrees F. Bake approximately 20 to 25 minutes in a regular oven until they are a light golden brown. A good check is to use an instant digital thermometer to test your bread. The temperature should be between 190 and 200 degrees.

Frost while still warm with the cream cheese frosting listed above.

First ride in a couple weeks - it was hard but so good! Thank you @onepeloton and @leannehainsby for such great classes! Here’s to another three years of awesome classes. So thankful to be able to be a part of this great community.
Hope it tastes as good as it smells. Happy New Year! 🥳
Christmas 2022! Everyone was home but I forgot to take a group photo. But we had fun - coffee tasting tour, wine advent calendar, gingerbread house decorating.
Getting into the Christmas spirit!
My view from the yoga mat!
Cleo being extra cuddly and cute this morning!
🙌🏻
I took the girls on a hike today and they were so great.